Ultimate Guide to Thai Greetings: how to say ‘Hello’ in Thai and how to ‘Wai’ properly

If you visit Thailand for the first time, you must be curious about how to say ‘hello’ in Thai and how to greet Thai people.

The phrase ‘hello’ in Thai is สวัสดี /sawaddii/ which literally means peace, goodness, and beauty according to Sanskrit.

In which each particle is used in different situations:

Many foreigners misunderstood that it’s about who you are talking to in which it’s wrong. It only matters about the gender of the speaker.

Honestly, we normally use ‘sawaddii’ at any time of the day. It doesn’t matter whether it’s in the morning, afternoon or evening, you can always use ‘sawaddii’ to greet.

However, there are still some phrases that are quite common as ‘Good morning or Goodnight’. Please take a look at the phrases below:

Please note that Thai people do not say ‘Good afternoon or Good evening’ in a modern age anymore.

Alternative phrases to greet in Thai

If you want to level up your Thai a bit and want to know other cool phrases or slang Thai people use to greet, please take a look at the phrases below with examples to use them properly. 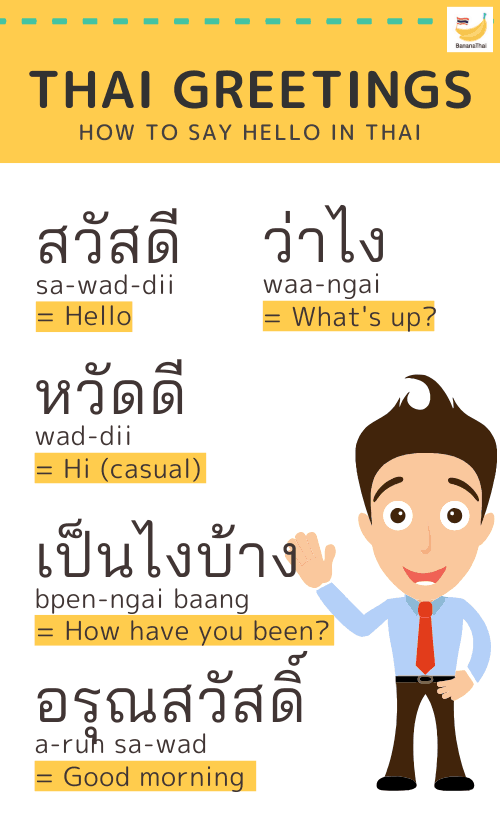 It is a big NO! to hug or kiss Thai people when meeting the first time (or anytime). You might make us feel uncomfortable, instead we ‘wai’ไหว้ (putting palms together) as we normally greet. 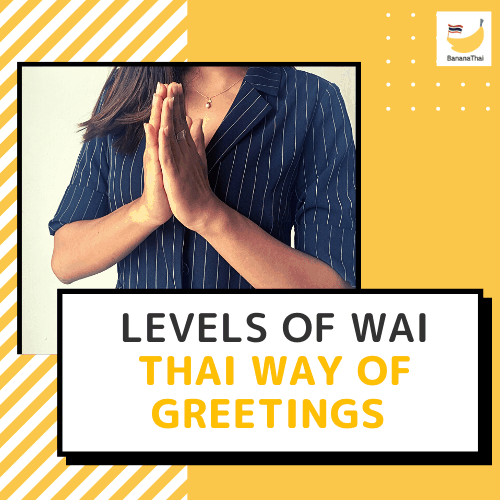 It is because Thai society is based on Buddhism, both being humble and respect seniority are some of the main values of Thai society. There are 3 levels of traditional ‘wai’ regarding 3 levels of age and social status:

1. To pay respect to Buddha, monks or sacred places

You would put your palms together. Your thumps are in between your eyebrows and you should bend forward. 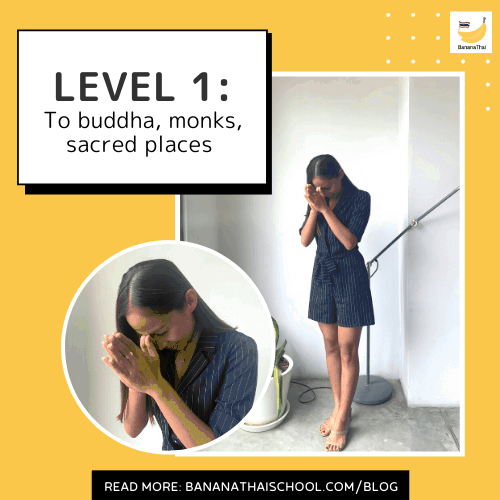 2. To pay respect to a senior, boss, your parents, teachers or anyone older than you

You would put your palms together. Your thumps are at the tip of your nose and you should bend forward. 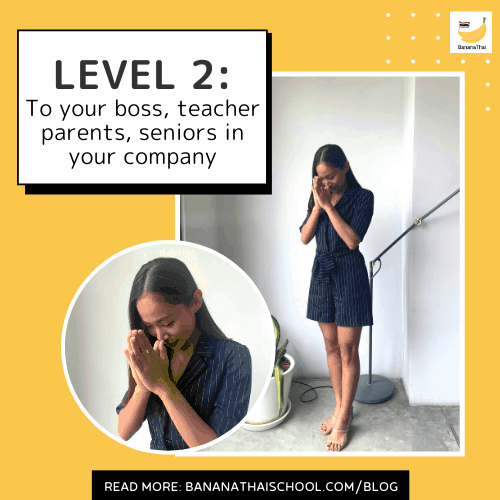 3. To pay respect to your colleagues or anyone who is a bit older than you.

You would put your palms together. Your thumps are positioned at your chin level and you should bend a bit forward.

In the present day, wai still exists and quite common in Thai society even though the 3 levels are sometimes mixed up. You can still see news reporters do the ‘wai’ while saying ‘sawaddii’ at the beginning and the end of the TV program. 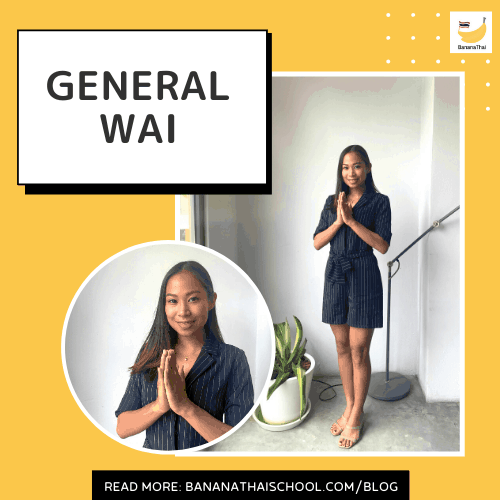 If you’re comfortable calling someone a friend and they are at a similar age, you can wai at the chest level or don’t even have to the ‘wai’ anymore when greeting people nowadays. You can just say ‘sawaddii’ or ‘waddii’ with a nice smile. That’s already enough. Your friends might feel uncomfortable if you ‘wai’ them.

It’s quite simple to properly greet with Thai people. Put a big smile on your face while saying ‘sawaddii’ in which you can use this word at any time of the day.

Do not kiss, hug people for the first time especially Thai seniors who are conservative. I would suggest you ‘wai’ them in a Thai traditional way.

If you meet Thai who is less conservative or live in international communities like someone living in Bangkok, or has studied abroad. This is an exception.

For example, I brought many foreign friends to my hometown and meet my family. My mom was still just doing the wai and smile, instead of hugging while my dad is a bit more open to shaking hands. 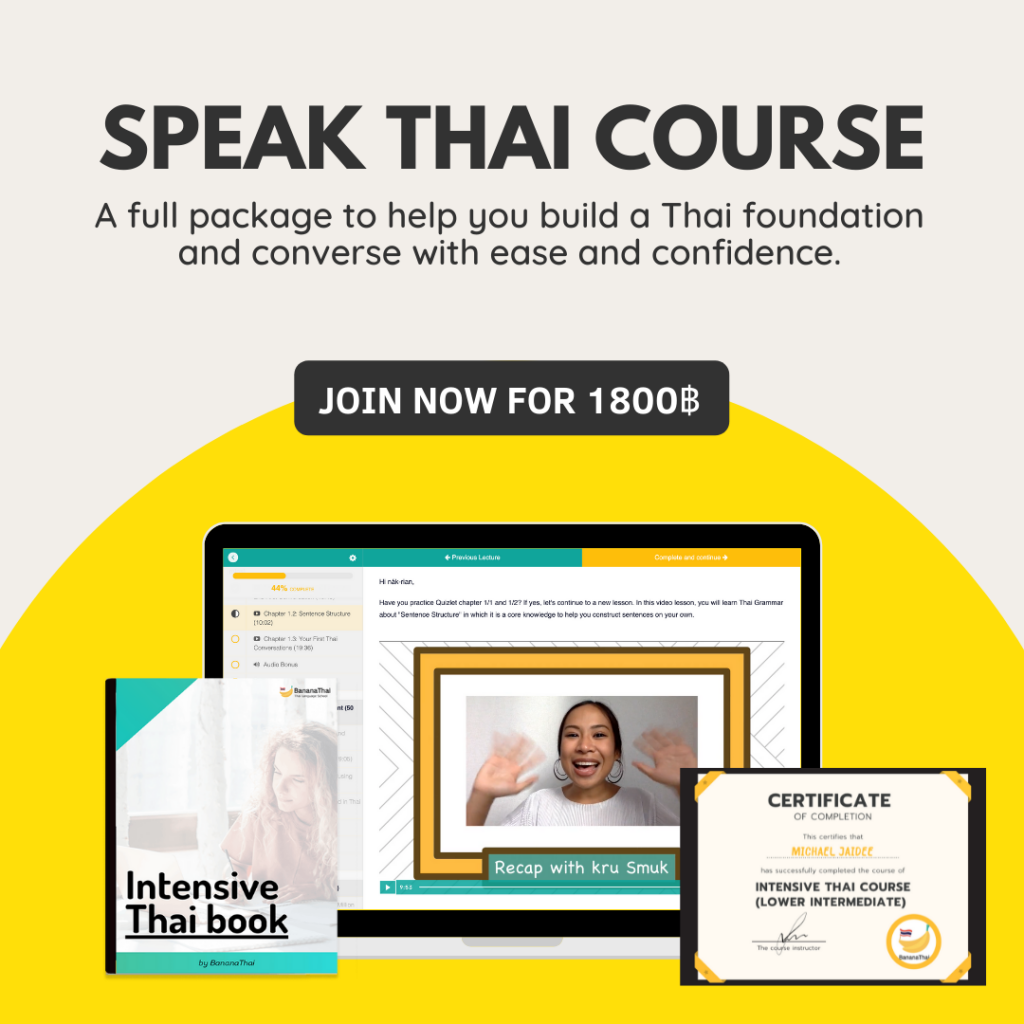 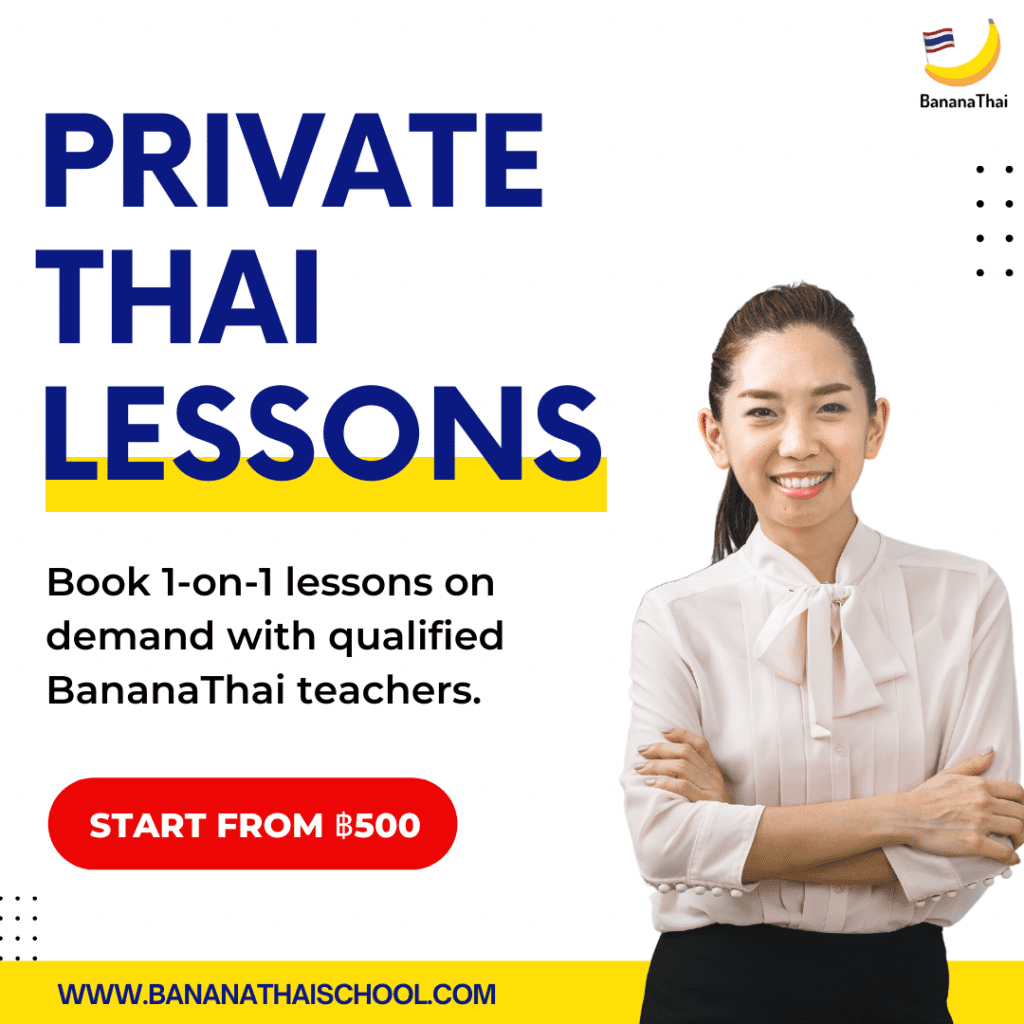